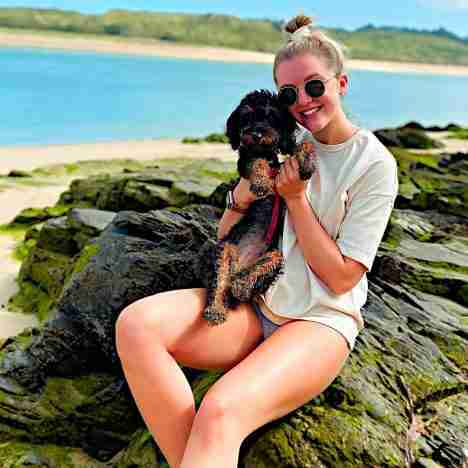 We recently sold our house, quit our jobs and bought a motorhome to live in full time and travel around the UK and Europe over the next year or so. Sounds crazy when you say it out loud doesn’t it?! We wanted to tell you all about our new home and show you around!

So the Swift Escape was not the motorhome we originally planned to get. This doesn’t mean that we’re not incredibly happy that we ended up with this motorhome.

The motorhome we originally planned to get was a brand new Peugeot Elddis. The waiting time for this motorhome kept getting delayed further and further by our dealership due to delays with manufacturing due to Covid, and we were starting to be on a tight timescale of when we wanted to start travelling, so for this reason we switched to the Swift which was in stock and ready to go. It was only a year old and had hardly done any mileage, and when we viewed it, we fell in love straight away.

Now that we’ve lived in this motorhome for a little while, and comparing it to the Elddis, we actually believe that this worked out for the better. We really do prefer the layout and the overall finish of the Swift, so we’re really pleased things worked out as they did.

The Swift Escape is a 4 berth motorhome. The overall width is 2.31 metres and the overall length is 7.41 metres. The payload is around 578 kg.

The cab contains 2 swivel captain seats which are fully adjustable and have arm rests. The cab also contains the reversing camera which we find super helpful when driving the motorhome. The motorhome also has reversing sensors. The cab also has some overhead storage, be careful when thinking about what items to have in this storage though and how the items may move around because having a heavy book fall on your head when you’re driving is not fun!

Moving to the living area. This has a corner sofa seat and also another sofa seat on the other side. The corner sofa seat has the 2 extra seatbelts for 2 more passengers. There is also a fixed table which can swivel and move around as required. We find this fixed table great, it’s a perfect place to sit and eat but also a comfortable place for us both to work at, as we plan to work as much as we can whilst we’re travelling. There is also storage under both of the sofa seats, overhead storage and reading lights.

Our motorhome has a fab little kitchen area which consists of a oven, microwave, tall fridge and sink area. There is also a fold-out extendable worktop space. There are overhead storage cupboards, a large under-sink storage cupboard which contains a cutlery drawer and a storage drawer underneath the oven. We did have some issues with our fridge which ended up being because we had the fridge vent covers on (which we were told by the dealership to leave on in the winter!). Now that we’ve removed them it works absolutely fine.

Just above the main door there is also the control panel. This is a touch screen panel where we can control heating, lighting, water etc. The panel is so simple and completely user friendly, we feel this is a really impressive feature of the Swift Escape 694 and helps us to keep on top of when we’re running low on water and our battery levels etc so that we can manage these.

Moving to the bathroom. This has a Thetford cassette toilet, a sink, mirror, shower, an under-sink storage cupboard, an overhead storage cupboard and a towel rail. For a compact bathroom, it has everything we need!

The bedroom has a double (maybe slightly smaller) island bed (which lifts up for extra storage space and access to the garage) and also extends to give you some extra length. There are also some USB points but only on one side of the bed, we wish they were on both sides. There are 2 wardrobe cupboards either side of the bed, and some overhead storage above. There is also a dressing area with a mirror and shelves underneath which I really love about the motorhome. Having somewhere to get ready in such a small space makes life much easier!

We’ve added some fairy lights around the bed to give a really cosy feel at night, and rather than having a TV we have decided to have a projector and screen in our motorhome. Our TV bracket / aerial was in a really awkward spot by the toilet door, half way down the motorhome. We prefer to watch the TV in bed which is why we decided to remove the bracket and have the projector instead.

There is also a curtain to close off the bedroom area to give it a more private feel and also makes it feel like it’s own little room which we love.

All of the windows and sky lights have blinds, which work wonderfully and completely block out the light at night, and fly screens and the main door has a fly screen too.

Some of the upgrades we have made to our motorhome are adding 2 solar panels to give 470 watts of power. We have also added a 2000kw inverter and 2 Gaslow LPG refillable cylinders. The reason we have made these upgrades is because we plan to live in our motorhome for at least a year full time and hope to do as much off-grid camping as we can to save money. We don’t always want to pay for campsites so we wanted to be as self-sufficient as we could be. Also, gas cylinders are notoriously difficult to get hold of at the moment and LPG seems easier to find and also more cost effective in the long run

We have also added a tracker, some security cameras, an alarm and window sensors – security is so important to us.

Would we recommend a Swift Escape Motorhome?

After a few weeks of living in our motorhome we absolutely would recommend a Swift Escape! Considering it isn’t the motorhome we originally chose, we’re so glad things worked out as they did and we ended up with this as our tiny home on wheels for the next year or so!

If you’d like to follow more of our adventures or keep up to date with our travel hints and tips, please join our Facebook group, we’d love to connect with you all! –https://www.facebook.com/groups/309295536220437/